The One that got Away – Flappy Bird

Have you heard of Flappy Bird? If you know or follow someone who’s even remotely into smartphone games, then you most likely have. It’s one of those simple but addictive games; press the screen to propel the bird upwards, avoid obstacles (pipes of the same design as those appearing in Nintendos “Super Mario Bros” titles, more on that later) and get a high-score. “Sounds easy enough, I think I’ll download it”. Problem is you can’t, as it has been removed from both Google Play and the App Store.

The creator, a Vietnamese gentleman by the name of Dong Nguyen, is as successful as he is enigmatic. He recently decided to pull the plug on Flappy Bird, a game that supposedly made him about $50.000 in ad revenue, per day. The reason apparently is that he couldn’t take the fame and infamy from Flappy Bird’s success. It doesn’t take a marketing genius to realize that turning down $50.000 a day just to receive peace of mind is 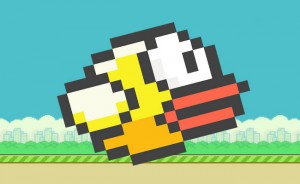 something quite out of the ordinary and bound to attract attention. And what attention!

After announcing the withdrawal, downloads went to the roof. The game has received more than 50,000 reviews – that’s more than Evernote and Gmail – and Mr Nguyen himself has amassed more than 160,000 followers on Twitter. There is of course a downside to this kind of media attention. The creator has received a hailstorm of murder and suicide threats from angry Flappy Bird fans. Considering the major media attention (and invaluable incentive that come with it), it’s easy to think of the announcement as a bold marketing stunt.

But it happened. You won’t find Flappy Bird in the app store anymore. Some people are disappointed and others couldn’t care less. Does this mean that Dong Nguyen actually got sick of it all? It could be, but you need to know this;

A marketing genius or game developer looking for a simple life? No one really knows – maybe it’s a way to avoid lawsuits from Nintendo for copying their design, maybe those threats on Twitter got the better of him. Maybe it’s a way to create artificial scarcity in order to increase revenue.

Regardless, this is a unique case that those interested in marketing should add to memory. If this wasn’t just a marketing stunt, then it will be interesting to see how others use information gained from the abrupt end to Flappy Bird.