The Psychology of an Internet troll

If you encourage people to comment on your content, don’t be surprised if some extreme POVs are expressed

We’re told that engagement is everything – especially in the world of content marketing. For the most part, this is true. But for some people, this maxim appears to have morphed into the equivalent of an ‘any publicity is good publicity’ philosophy. 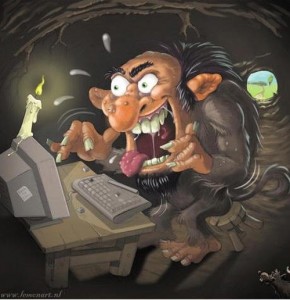 If you engage in content marketing and want people to engage with you through it, or even if you’re simply enjoy consuming online content, you’ll have noticed that every so often a comment pops up that is so inflammatory that it seems to be inviting a tirade of reactions and responses.

Which is exactly what it is doing. Internet trolls span the entire spectrum from satirical pot-stirrers to highly offensive, hate-mongering racists. Or worse. Yes, worse.

UK man Sean Duffy was jailed after leaving disgusting images and comments on Facebook tribute pages dedicated to honouring dead children. Suffering from a range of mental illnesses, it was found Duffy had become ‘hooked’ on trolling, and spent hours searching the Internet for tribute sites purely to mock people’s losses. Sadly, this is not an isolated event, and attacks on grieving families, purely for sport, are all too common.

Satirist David Thorne has had more than his fair share of trolling experience, usually with fairly comedic outcomes. His targeted trolling efforts are well documented on his website, and most invite hearty belly laughs. It’s easy to see how the line from funny to cruel can be crossed (admittedly, it’s a tightrope Thorne teeters across regularly) and in an interview with Wired, Thorne discusses one of the ‘meaner’ pranks he ever pulled:

‘I joined a knitting forum under the guise of Edna, a 74-year-old woman with 14 grandchildren. After making friends and exchanging crosshatch tips, I declared, “I can hear someone breaking in downstairs,” and logged off, forever.’

Trolling can be a corporate endeavour

It isn’t just individuals engaging in trolling – far from it. While it may not always be branded as such, trolling is commonly found on mainstream news sites – and not just by the commentators. Last year, a ‘travel’ article by Carolyn Webb appeared on SMH that basically decried Bali as a horrible place filled with rabid hawkers who didn’t even have the decency to learn her Australian customs and conform to them. It was deliberately inflammatory, and whether or not this was the choice of the editor or the writer herself, it provoked an overwhelming 1001 responses, and led to the hashtag #carolynwebbwhybother trending on Twitter. 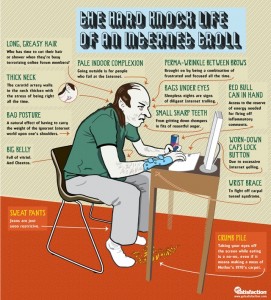 So what is the motivation for all of this rabid, angry, online commentary? Obviously, in online news situations, more engagement leads to more advertiser dollars, so there’s no real mystery there. But what of the individuals who deliberately provoke outrage and hurt for sport? Is the world really filled with this much rage?

A study conducted at Stanford University discovered that the people who held the most extreme views were more likely to be the most vocal about them (don’t you just love it when research dollars go into proving things that anyone with a pulse can see as plain as day?). Students were polled and it was discovered that the vocal few actually represented an extreme minority, but because they were so vocal, seemed as though they were speaking for many.

It may not be a groundbreaking revelation, but at least it might help you sleep a little better at night knowing that the majority of people aren’t crazed cowards hiding behind their keyboards.