The Catholic Church has always strived to keep everything traditional. Its churches all look like they were built in the 12th century, priests and acolytes still wear dress-looking albs, and priests still speak in Latin during masses regardless of their native language. In fact, the way they have reserved this unique culture has been commendable.

However, it seems that Pope Francis, the newly elected pope after Benedict XVI’s resignation, is looking to change things a little bit. Acknowledging the effect (and importance) of social media in today’s society, the Catholic Church has announced that it will be offering indulgences online. What does this mean?

Well, for Catholics, by following the pope and Vatican’s official accounts on Twitter and other sites, they can reduce the time they spend in purgatory.

What on Earth is Indulgences and Purgatory?

Catholics believe that after a person dies, one who is in the state of grace, he or she will go to Purgatory. This place in the after-life is believed to be a place of purification from temporal sins. Now, indulgences are given to reduce the number of years that a soul stays in Purgatory.

“The notion of indulgence is that you’ve already been forgiven for your sin, because you’ve gone to confession, at least in theory, but what it does is reduce the amount of time you have to spend in purgatory after you die to work off that sin,” Patrick Hornbeck, Department of Theology Chair at the University of Fordham in New York, told CBS News.

Why would the Church even do this?

According to reports, this move is in accordance with the upcoming World Youth Day that will be happening in Rio De Janeiro. The offering of indulgences through an online platform is the pope’s way to allow people to take part in this event even if they are miles away from Brazil. 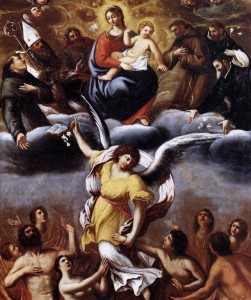 However, it is also worth noting that this new offering is, in part, the church’s effort to draw more people into this event. By allowing the youth to take part in the activities and rewards (if you can call them indulgences) online, this unique online strategy brings in more people to – at the very least – be aware of the World Youth Day.

What can we learn from the Pope’s new groove?

While some may think it is inappropriate to look at this move in a business perspective, the fact is this service makes for a very good digital marketing strategy. Instead of spending money on campaigns that will only reach so far, why not target your market (in this case, the youth) on their own turf: the Internet. By allowing Catholics to join through this communication platform, both camps get the best out of what they have—Catholics are able to join in the festivities through Twitter, which they use all the time; and for the church, they get to reach more people and still spend less in doing so.

@TickYes
The Console Wars: PS4 vs Xbox One