We have the technology

Should governments have the right to monitor our online/mobile lives? 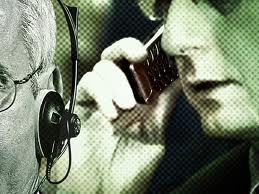 How would you feel if the government had the right to ‘spy’ on your email exchanges or website visits? Angry? Violated? Or would you simply shrug and think, ‘Well, Google does it…’

In the interests of crime-prevention, democratically elected governments around the world are suggesting increasingly Orwellian means of monitoring their citizens. In Australia last week, NSW Police Minister Michael Gallacher argued that genetic samples should be collected from all newborns and added to a DNA database and used to compare crime scene DNA.

‘It’s something that needs to happen and it needs to start to be considered by governments,’ Gallacher said, with NSW Police’s Chief Scientist, Tony Raymond adding that ‘probably half’ of the country’s unsolved crimes ‘would be solved immediately’ as a result.

In the UK, meanwhile, the AFP reports that the coalition government is expected to try to pass a law that enables its electronic ‘listening’ agency, GCHQ, to examine ‘on demand’ and in ‘real time’ details of any phone call, text message or email, and any website visited.

The British government has been at pains to point out that content will be excluded from such monitoring but rather ‘time, duration and dialling numbers of a phone call, or an email address’. Further, it argues that ‘it is vital that police and security services are able to obtain communications data in certain circumstances to investigate serious crime and terrorism and to protect the public’.

Whether the UK laws are passed successively remains to be seen. The previous (Labour) government tried and failed with similar proposals in 2006, and MPs on the Conservative-led coalition’s own benches are raising significant concerns this time around.

And in both Australia and the UK (and in other countries like Canada, where a similar attempt to monitor online and mobile communication has created a mass social media protest movement), civil liberty groups are voicing their doubts and worries about the proposals. Proponents, meanwhile, would argue that in both cases, if you have nothing to hide you have nothing to fear, and that if the measures solve or, better, prevent serious crime it has to be a good thing.

So where do you stand? We have the technology, but how should we be using it…?