The new iPad has just been launched, but Australians can’t benefit – yet – from one of its biggest selling points 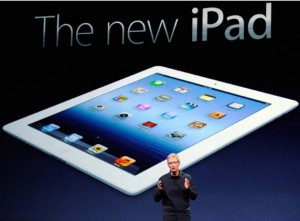 With just as much fanfare, but slightly less showmanship, the first Apple launch of the post-Steve Jobs era has taken place and the iPad 3 is worth us (or it will be on 16 March when it goes on sale in Australia and the other leading markets around the world).

And after all the fevered speculation about what features the new Apple tablet would boast, the reaction from the experts who have had a chance to play with it has been… well, rather mixed.

Despite Apple CEO Tim Cook claiming his company has ‘redefined once again category Apple created’, even the term ‘the iPad 3’ is something of a misnomer. The new tablet will simply be called ‘the iPad’, which may cause confusion as the iPad 2 will still be sold.

The catch for Australian consumers for whom 4G capability may be a selling point (and therefore worth the extra money) is that the only 4G network currently available in this country is Telstra’s, which users a different frequency to 4G networks in the US. Hence, ZDNet reports that the iPad cannot be 4G in Australia – at this stage, anyway.

To see what the experts think, and how the new iPad stacks up against its rivals, click here.