Modern-day content king and antihero, Julian Assange, to cameo in 500th episode of The Simpsons 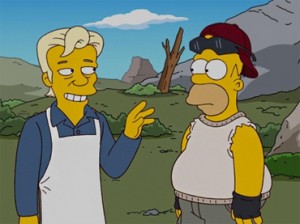 We have a theory that is provable time and time again. Most things in life (most important things at least) can be understood simply by placing it in the framework of The Simpsons.

The show, famous for its canvassing of current affairs and major historical figures and events, is like a pop culture catalogue that can take even the gravest of situations and put a quirky, irreverent and… well, yellow spin on things.

As The Simpsons approaches its 500th episode (bet that makes you feel old, eh?), its writers and producers are keeping with tradition and including a VIP cameo – from Wikileaks founder Julian Assange.

Assange will join a long line of famous (and infamous) people to appear on the show, with alumni that includes former US presidents, Hollywood stars and Grammy award-winning musicians.

For a TV show attempting to stay culturally relevant, a cameo from Assange himself (who had to be recorded for the part over the phone due to certain travel restrictions) – on the 500th episode no less – is surely a big feather in the cap.